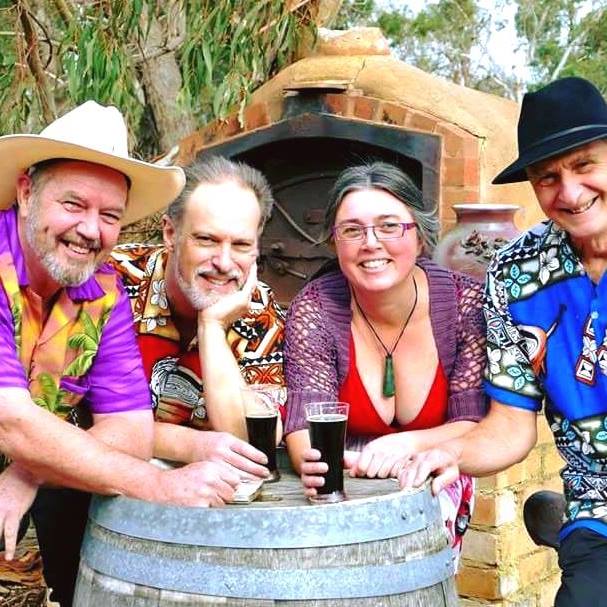 Foot-tapping, body-swaying music and banter, that leaves a smile on your face – music your Mama sung to you.
The Jug band with no jug, but wait … they have a Mama now! After many years MMJB has a new member – Sally has joined the lineup on fiddle.

Mama’s Mountain Jug Band plays a mixture of back to roots music, old Hillbilly songs, Jug band gems, Hokum, Jazz, Blues, and that dash of Barbershop Harmonies.
Recently Mamas have featured at several festivals including the Fiddlers Convention in Yarra Junction, The Kelly Country Pick in Beechworth, The Foggy Mountain Festival in Kinglake and the Mornington Street Festival.
They have a regular gig at Hickinbotham winery, pulling in crowds from far and wide.

Mama’s waiting for you – come on in and meet the guys!

There are 3 members in the band, but all are multi-instrumentalists, so one is never quite sure who will pick up that loose instrument next. The line-up is:

Evan Webb
Evan Webb – Providing that distinctive slide Dobro sound, Evan also plays Mandolin, Guitar, Bass, Ukulele, Harmonica, Vocal interruptions, and occasional piano (as long as he doesn’t have to carry it in!). Evan also plays in an Australian/Irish band, and has played in many bush bands and even a rock & roll band.

Keith Rea
Keith Rea – On Guitar and Bass, at the same time, he’s the rhythm backbone that drives the band, with stunning guitar solos when let loose. Keith also plays mandolin and vocal interruptions. Keith will admit to owning a kazoo if hard pressed! He plays in several other bands, a contemporary duo – ‘The Incident,’ and a 4 piece classic covers band – ‘Beat That!’.